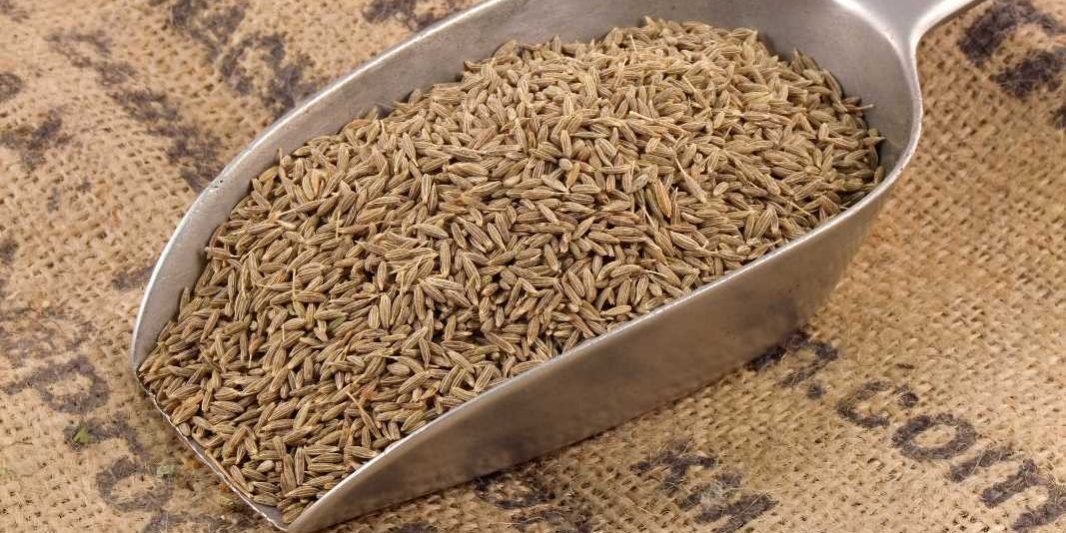 Cumin is the dried seed of the herb Cuminum cyminum, a member of the parsley family. Cumin seeds are used as a spice for their distinctive flavour and aroma and is also well known for its medicinal properties in India and many other Asian countries. It is globally popular and an essential flavouring used in many cuisines, particularly South Asian, Northern African and Latin American cuisines. Cumin seeds are also a rich source of iron, a vital nutrient that helps in keeping the immune system healthy and strong.

Although the small cumin seed looks rather unassuming, its nutty peppery flavor packs a punch when it comes to adding a nutty and peppery flavor to chili and other Mexican and Tex-Mex dishes as well playing an important role in Indian and Middle Eastern cuisine where it is a key component of curry powder. Both whole and ground cumin are available year-round.

Cumin seeds resemble caraway seeds, being oblong in shape, longitudinally ridged, and yellow-brown in color. This is not surprising as both cumin and caraway, as well as parsley and dill, belong to the same plant family (Umbelliferae)

It is probably not just for taste alone that cumin has made it into the stellar ranks of Indian, Middle Eastern and Mexican cooking. This ordinary looking seed is anything but ordinary when it comes to health benefits.

Iron for Energy and Immune Function

Cumin seeds, whose scientific name is Cuminum cyminum, are an excellent source of iron, a mineral that plays many vital roles in the body. Iron is an integral component of haemoglobin, which transports oxygen from the lungs to all body cells, and is also part of key enzyme systems for energy production and metabolism. Additionally, iron is instrumental in keeping your immune system healthy. Iron is particularly important for menstruating women, who lose iron each month during menses. Additionally, growing children and adolescents have increased needs for iron, as do women who are pregnant or lactating.

Cumin seeds have traditionally been noted to be of benefit to the digestive system, and scientific research is beginning to bear out cumin’s age-old reputation. Research has shown that cumin may stimulate the secretion of pancreatic enzymes, compounds necessary for proper digestion and nutrient assimilation.

Cumin seeds may also have anti-carcinogenic properties. In one study, cumin was shown to protect laboratory animals from developing stomach or liver tumours. This cancer-protective effect may be due to cumin’s potent free radical scavenging abilities as well as the ability it has shown to enhance the liver’s detoxification enzymes. Yet, since free radical scavenging and detoxification are important considerations for the general maintenance of wellness, cumin’s contribution to wellness may be even farther reaching.

Cumin is available both in its whole seed form and ground into a powder.

Cumin is native to Egypt and has been cultivated in the Middle East, India, China and Mediterranean countries for millennia. Throughout history, cumin has played an important role as a food and medicine and has been a cultural symbol with varied attributes.

Cumin seeds were highly honored as a culinary seasoning in both ancient Greek and Roman kitchens. Cumin’s popularity was partly due to the fact that its peppery flavor made it a viable replacement for black pepper, which was very expensive and hard to come by. Cumin was also noted for both its medicinal and cosmetic properties. Its application to induce a pallid complexion was frequently employed by many students trying to convince their teachers that they had pulled “all-nighters” studying for their classes.

Although a much prized spice, cumin became a symbol of frugality and greed in ancient Rome. Both Marcus Aurelius and Antoninus Pius, emperors with a reputation for their avarice, were given nicknames that included reference to cumin. During the Middle Ages in Europe, cumin was one of the most common spices used. Around that time, cumin added another attribute to its repertoire—it became recognized as a symbol of love and fidelity. People carried cumin in their pockets when attending wedding ceremonies, and married soldiers were sent off to war with a loaf of cumin bread baked by their wives. Cumin’s use for fortifying love is also represented in certain Arabic traditions in which a paste of ground cumin, pepper and honey is thought to have aphrodisiac properties.

While it still maintained an important role in Indian and Middle Eastern cuisines, the popularity of cumin in Europe declined after the middle Ages. Today, cumin is experiencing renewed recognition owing to newfound appreciation of its culinary and therapeutic properties.

How to Select and Store

Whenever possible, buy whole cumin seeds instead of cumin powder since the latter loses its flavor more quickly, and the seeds can be easily ground with a mortar and pestle. Even through dried herbs and spices are widely available in supermarkets, explore the local spice stores or ethnic markets in your area. Oftentimes, these stores feature an expansive selection of dried herbs and spices that are of superior quality and freshness compared to those offered in regular markets. Just like with other dried spices, try to select organically grown dried cumin since this will give you more assurance that it has not been irradiated. Cumin seeds and cumin powder should be kept in a tightly sealed glass container in a cool, dark and dry place. Ground cumin will keep for about six months, while the whole seeds will stay fresh for about one year.

Cumin seeds are an excellent of iron, a very good source of manganese, and a good source of calcium, magnesium, phosphorus, and vitamin B1. In addition to the nutrients highlighted in our ratings chart, an in-depth nutritional profile for Cumin seeds is also available. This profile includes information on a full array of nutrients, including carbohydrates, sugar, soluble and insoluble fibre, sodium, vitamins, minerals, fatty acids, amino acids and more.